There has been reporting in the past few days about how our "horse-chestnut trees have only 15 years left", or some variation of that theme. It sounds dramatic, but is it true?

Well, horse-chestnut trees won't be extinct in 15 years, or 30 years, you can be reassured about that.

But, they are likely to become scarcer and scarcer in the next decades and the reasons for this are due to the combination of a cocktail of pests and diseases combined with management by humans.

This is described in the graphic below - and because we believe it is so important to base conclusions on evidence, the evidence for each of these statements is given below the graphic. Of course, the graphic is  simple representation of what is going on, but hopefully it helps.

What is even more sobering is that there are cocktails of threats also facing many of our other trees. This is particularly concerning when it is affecting our native trees, oaks in particular, and so there is lots of research (including citizen science projects) to discover more about these. 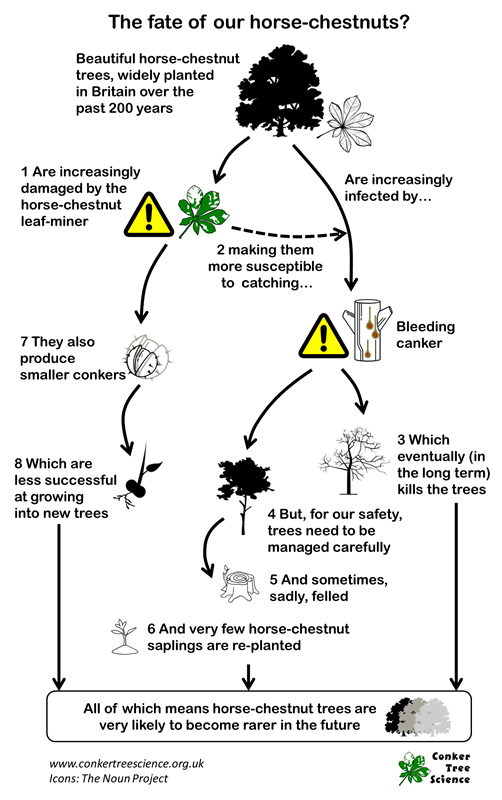 1. Horse-chestnut trees are increasingly damaged by the horse-chestnut leaf-miner. The spread of the leaf-miner was first recorded by Forest Research, but then the data from thousands of people in the Conker Tree Science citizen science project quantified the levels of damage across the country. And the project continues, so please do take part!
2. Horse-chestnut trees have reduced 'photosynthetic capacity' (the green material they use to make their own food from sunlight is eaten!) which means that they are more likely to suffer from bleeding canker. This has been shown with experimental research (with a great blog summary), although a previous paper didn't find the result and suggested that the leaf-miner did not affect the growth of the trees.
3. Bleeding canker can kill horse-chestnut trees, although they can survive with the disease for a long time.
4. It is recommended that trees affected with bleeding canker need to be regularly surveyed and will often require management. One reason is to avoid the risk of recently-dead branches dropping from the trees, so the management is necessary for people's safety.
5. Sometimes the most vulnerable horse-chestnut trees, sadly, need to be felled (with just one of many examples reported by a local council).
6. Several years ago a trade magazine reported that there had been a 98% reduction in the sale of horse-chestnut saplings.
7 and 8. The horse-chestnut trees which are badly infested with the leaf-miner produce smaller conkers, and these smaller conkers have poorer germination success. (It is worth noting though, that the majority of horse-chestnut trees in public spaces will have been planted rather than naturally re-generated from seed.)

There has been a huge amount of research on horse-chestnut trees, so here we have highlighted just a few of the excellent work that has been done. Not all studies perfectly agree with each other (which is the nature of cutting-edge scientific research) but they do agree in their overall conclusions.

The icons in the graphic are from The Noun Project and are credited:
Large tree and small tree by Humberto Cesar Pornaro, leaf and conker by ludmil, warning symbol by Alain Loubet, trunk by Nikki Rodriguez, seedling by  Jeneeta T J, bare tree by Milena Zanotelli, stump and sapling by parkjisun. The leaf-miner icon is from the Conker Tree Science project. Of course all the icons are illustrative only and are not always of the species in question.

Posted by conkertreescience at 03:26 No comments: